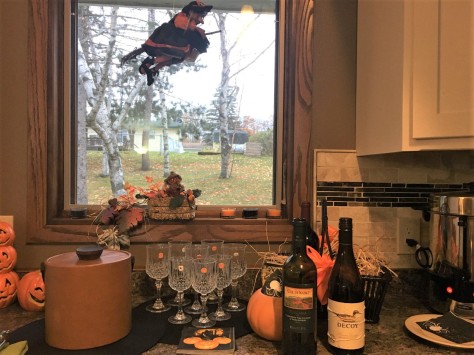 October’s crisp autumn air and brilliant forest colors quicken our thoughts and actions to prepare, as nature does, for the shortened hours of sunlight – the “dark side of the year.”

As a grandmother, I’ve experienced this transition many times. Preparation comes in many forms and has evolved as did ancient customs.

The ancient Celtic festival of Samhain (Gaelic pronunciation – sow in) was considered the most important of their quarterly fire festivals. Harvest was complete and time threatened the onset of winter, midway between the fall equinox and winter solstice.

They believed it a time when barriers were breachable between the physical world and denizens of the underworld. Celtic Druid priests set circular bonfires (to represent the sun) while the Celts wore costumes to scare off ghosts.

By the eighth century when Pope Gregory III established a day to honor all saints on November 1st, Samhain customs of the Celts melded into the activities of All Saints Day. October 31st, All Hallows’ Eve evolved into Halloween. Jack-o-lantern carving, costumes, trick or treating, festive gatherings, apple bobbing and yarn tricks to foretell the future were a few of the common activities practiced.

My personal evolution with Halloween hovers on the bright side. The crisp air and autumn colors prompt me to prod my husband to bring me numerous containers

marked “Halloween” from storage. I decorate our home with the delightful contents. Each item evokes memories of years past, even to the scents and joys of childhood.

In my childhood, the major decision of the week before Halloween was what costume we would create. Father often was the creative costume designer. Mother would bake sugar cookies cut-outs of

moons, stars, and witch hats for the classrooms of each of my sisters and me. When the awaited day arrived, the afternoon of the school day commenced with students dressing in their costumes for the elementary school parade. We marched throughout the halls and classrooms admiring the creativity of our efforts. We returned to our rooms for a party of treats and laughter. We knew this was not even the end of day’s fun.

After supper, we donned our costumes again to follow the town fire truck (with siren sounding and lights flashing) as we marched down Main Street. We were led to the high school gymnasium for a costume contest and movie, after which each child received a popcorn ball, fruit and candies in a small paper bag. 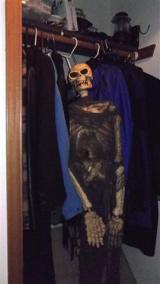 movie. We’d walk to the theater around 11:00 pm to begin our night of terror with the entertainment of Boris Karloff and Bela

Lugosi. Some of the more deviant souls of the crowd would leave early to lunge at us from behind hedges as we passed on our walk home. This would send us on a dead run, breathless until we were behind our locked door. Now living in another small town, with our own children grown and off to greater endeavors, I delight in seeing the ghouls, goblins, angels, butterflies, mini SWAT team members, witches, minions and others that come to our home to trick-or-treat. We have approximately three hundred and fifty each year. 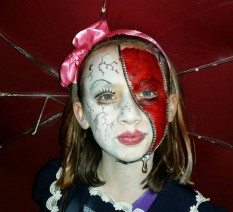 Halloween is the greatest! Young and old alike can be whatever we want for the day (and eat a lot of sweet treats as well)! If you are passing by this Halloween, you will find my sister-in-law and me greeting our ghoulish visitors in our new inflatable TREX costumes. I know, two grandmas dressed as dinosaurs.

A final tip from the two grandmas. If you toilet paper the neighborhood, be certain you do your own house as well, or they’ll know it was you!